Gold futures contracts fluctuated in a narrow range tilted to the upside during the Asian session, to witness its rebound for the fifth session in six sessions from the lowest since May 19, amid the rebound of the US dollar index for the fourth session in six sessions from its highest since the 14th of the same month, according to the relationship The opposite between them is on the cusp of developments and economic data expected today, Friday, by the American economy, and with looking forward to the activities of the G7 meetings in England.

Investors are currently awaiting by the US economy, the largest economy in the world, the disclosure of the preliminary reading of the University of Michigan index of consumer confidence, which may show an expansion to a value of 84.1 compared to 82.9 in the previous reading for the month of May, in conjunction with the disclosure of consumers' expectations about inflation. For the next one year and for the next five years.

Otherwise, the markets are looking forward to the activities of the meetings of the Group of Seven industrialized countries, which are scheduled to be held until next Sunday in Cornwall, England, which will be attended by the finance ministers and central bank governors of the seven industrialized countries, each of Canada, Italy, France, Germany, Japan, the United Kingdom and the United States. These meetings are closed to the press, but some officials usually speak with reporters and a closing statement is issued to the group.

It is noteworthy that US President Joe Biden went to Britain last Wednesday on his first foreign trip after assuming control of the White House, as part of an eight-day mission to restore tense relations during the era of former US President Donald Trump and reformulate US-European relations and foreign relations with Russia, especially that Trump He imposed tariffs and withdrew from international treaties during the previous US presidential term. 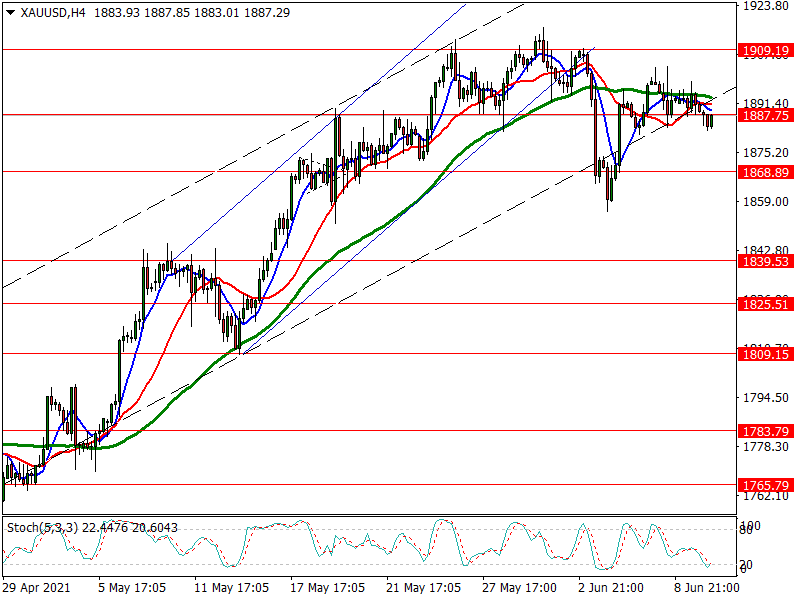 Gold price continues to rise to test the $1900.00 barrier now, reinforcing the expectations of continuing the bullish trend, which is organized within the bullish channel that appears on the chart, reminding you that our main awaited target is at 1928.60.

Moving above the EMA50 supports the expected rise, which will remain valid unless the 1876.00 level is broken and stability below it.

The forecast trend for today: bullish

Author: GC
Back to all reviews Back